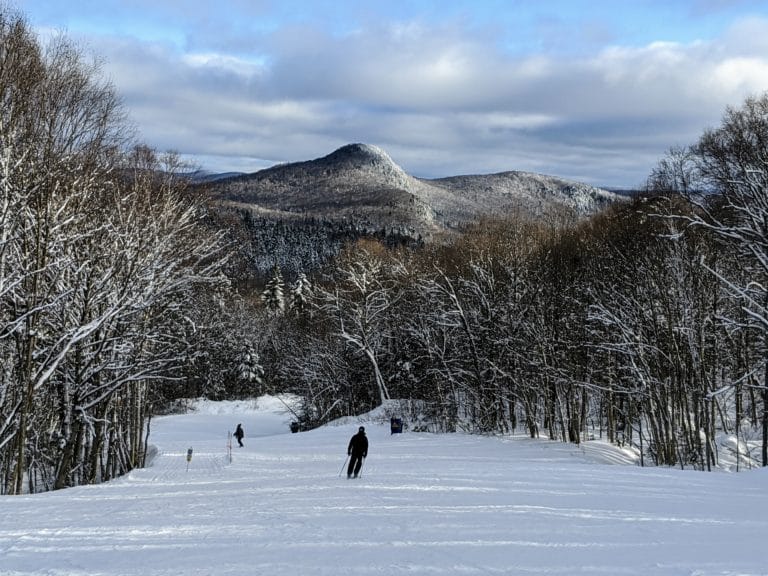 This article was updated on September 9th, 2020

I don't recommend ignoring the speed warnings if you're told to slow down from the Tesla screen to make it to your destination! I had to make a short pit stop at the Destination Charger at Saint-Sauveur Summit to continue to Mont-Trem. They had ample chargers for Teslas, as well as a bunch of standard plugs.

I plug back in Mont-Tremulent to determine how much charge I need to safely reach the mountains. The navigation seems to aim for 5% while I go for at least 10% ideally so I can move at a quicker pace.

I was able to communicate to my Airbnb host and charge my car while I snowboarded today! I only needed to charge to 50%ish via the Supercharger and left it plugged in at the house. The host informed me that I could take the shuttle to the ski hill, such a convenient experience!

Waiting for the Bus Shuttle

Let's Get to the Boarding!

I believe this is a ski run called Beauchemin Haut based on my GPS coordinates but it's difficult to tell from Google Maps. This was one of my favorite views which is the north side of the mountain.

The view really started to open up later in the afternoon and could see the beautiful mountain peaks!

Here you can see the view of Lac Tremblant to the west. I had a blast boarding out here and would totally go again!

I ended up having the Airbnb all to myself and got a great night of rest. They had a great living room setup and fast WiFi. $58.16