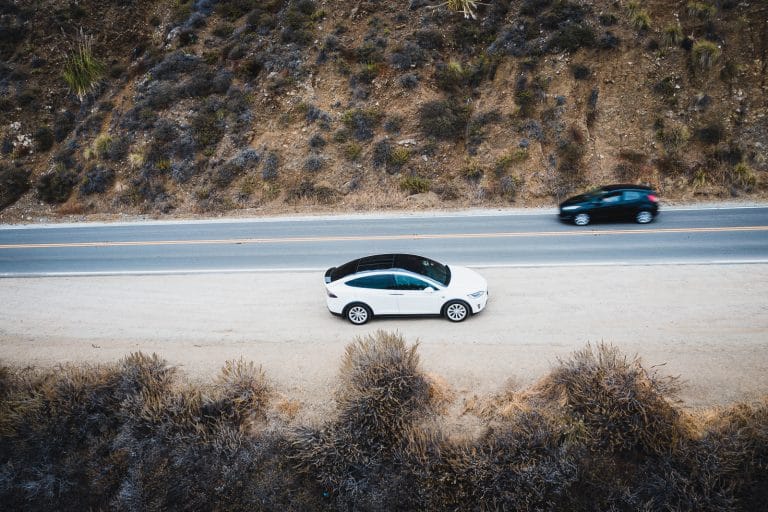 I rented the car through a relatively new service called Turo. It's a car sharing platform for people who are willing to rent out their cars to others. It's like Airbnb, but for cars.

Driving highway 1 was one my favorite driving experiences to date and driving a performance vehicle didn't hurt.

It was about 70-80% charged when I picked up the car from the specified location on the day of my reservation. I saw about 241 mile range when I charged this car to 100%, so at 64K miles there was a battery loss due to battery degradation. Otherwise, I saw about 200-210-220 mile range when I would charge the car to 80-90% according to the default settings. I learned that this was the optimal setting, but the owner of this car allowed their customers to fully charge if needed for longer trips. One result of my trip was that I found that the Supercharging estimates were far away. If, for example, I was told 35 minutes to charge and I left to have a coffee., 10 minutes later, when I returned to the car, it was still reading 35 minutes. Granted, miles were added to the battery. If I had access to the owners “Tesla account, I could have followed the charging progression from the official Tesla app. Unfortunately, with the Turo app, there is no way to see these estimates from outside the car, and I had to be extra vigilant, otherwise I would be charged a Supercharging idle fee if I let the car charge for five minutes or more.

On Tesla's website, Ventana is listed as a 24 / 7 Supercharger in Big Sur, California, but when I showed up to top off the Model X to get enough power for the epic coastal drive. They were doing construction work on the road leading to the Tesla Superchargers, and did not let anyone get through to them until after 5 p.m. when they were finished, which could have been a disaster for anyone traveling from Atascadero to the nearest Tesla Supercharger heading south, which is about 100 miles (160.934 km) away. With this Tesla Model X with an 80% charge, it would have been a particularly close race.

I fully charged the X up to about 241 mi (100%) the night before at the Del Monte Shopping Center, which has 10 Tesla Superchargers with max. 120 kW. I must have made a few extra stops, because at 1 p.m. I decided that I had to charge for 10 minutes at the Ventana Supercharger (arrive with 30% per car) to have enough energy in the battery to reach my hotel (arrive with 26% per car). Do I come back here and miss other interesting places or risk getting stuck and hopefully use the charger after 5 p.m.? I decided to go back because I was hungry and everything is very limited in the Big Sur area. I reached the road construction on an unmarked section of the CA-1, which had one-way traffic and people got out of their cars to enjoy the view and check out the bridge. “Nevermind”! , I told myself after 15 minutes, I whipped a U-turn and drove back to Limekiln State Park to hustle along a path to Limekiln Falls.

There were many fallen trees, so this was not an easy hike to the waterfall, but it was worth it anyway!

Big Sur, CA around 5: 00 p.m., the road was clear leading to the Tesla Supercharger! That was such a relief. 1 hour & 10 minutes was the estimate to get the battery back to 241 mile range. I saw only 16 kW of charging power when I left the car there to visit their restaurant and bar.

Last stop for the day of my Highway 1 tour was Garrapata State Park.

Superchargers used on this leg of the trip:

If you could use my referral link to buy a Tesla Model 3, S or X. I will use my extra Supercharging miles to photograph our beautiful country. See below:

⚡⚡⚡Use my referral link to receive 1,000 free Supercharger miles (1609.34 km) with the purchase and delivery of a new Tesla car, or earn a $100 award after system is activated by purchasing or subscribing to solar panels: Model S, Model 3, Model X [tesla.com] or Solar Panel [tesla.com].

TESMAT could be the right mattress for your next Supercharger nap, car camping trip, or the perfect gift for your favorite Tesla Model 3/Y owner. You can use my coupon code to save on your purchase.
Learn more:

Thanks to Arcadia for sponsoring 50% of my energy use in clean energy. I rely on them due to the heavy use of energy produced from coal in Wisconsin. Join me in adding clean energy to the grid and Arcadia will take $10 off your next power bill.
Learn more:

Save $10 on Clean Energy

I may earn a small commission for my endorsement, recommendation, testimonials and / or links to products or services linked above. Your purchase supports me in bringing you more photographs, travel guides, and more trips around the world.