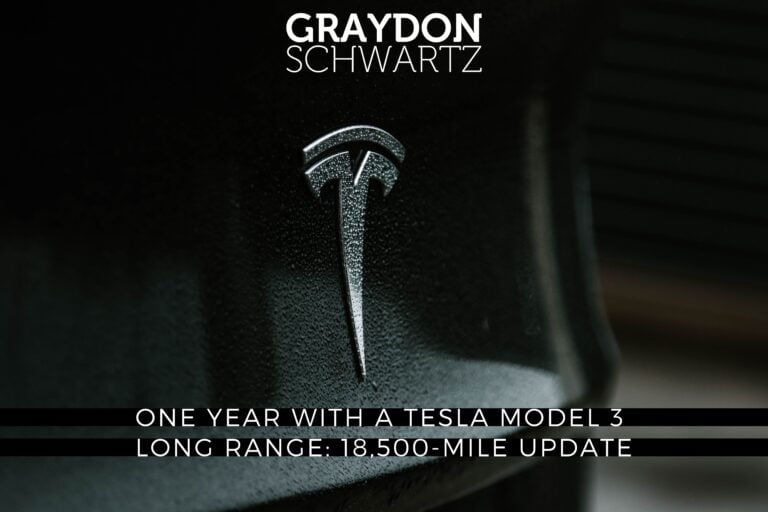 This article was updated on November 5th, 2020

My premium connectivity trial has recently came to an end, which reminded me that I've been driving my Tesla Model 3 for an entire year! The odometer just rolled over 18,500 miles (29,772.86 km) and felt I should write a report about the milestone.

You are able to stream Netflix, Spotify, and other premium features via your phone's Wi-Fi hotspot. I have found that the main inconvenience is turning the feature on and making sure the car picks up the hotspot. WiFi turns off automatically from time to time.

What can happen in 365 days if you own a Tesla?

Tesla has added two new buttons to its navigation system to suggest local point of interest.

We've used it a couple of times.

As other owners have written online, the catalog for the Slacker Radio app has been greatly reduced, where you can't find any well-known mainstream artists or even lesser-known artists. I stuck with the artist radio stations I created when I took ownership but I haven't been able to add any new artist radio stations since.

In my Canadian road trip series, I subscribed to Spotify to get my favorite artists back.

It was discussed extensively and in a number of posts in the official Tesla forums because there had been a stealth Model 3 for some time, which was basically a Tesla Model 3 Performance without track mode, high-performance suspension, brakes or wheels. There was some controversy that the Long Range Model 3 and the Performance Model 3 had the same front and rear motors.

Finally, they started offering a performance upgrade for M3 Long Range for 2000 dollars. I did well to resist the compulsion to buy. 😀 It's just so fast and from what I've read, you need a high state of charge to get the full ‘boost'.

A third-party company has managed to find a way to unlock or uncork it, but you run the risk of Tesla either removing your performance hack or worse, losing access to the Tesla Supercharging Network or updates etc.

I found this with my Autopilot-enabled Model 3 without Full Self Driving (FSD). If I had chosen FSD, my car would now also respond to stop-and-go traffic lights! I find it hard to justify paying another $10,000 + tax for FSD, especially as the car gets older.

What range do I see now?

Now that I have covered 18847 miles in this electric rocket, I now see 296 maximum range when I recharge the battery to 100% (down from 310mi). Unfortunately, I have no data before February 21 of this year, because I had not yet come across TeslaMate or TeslaFi.

The peak of the mileage around 7 / 16 was when we started our trip to South Dakota. 🙂

Overall, seeing a steady battery progression as the car battery is aging. I know this isn't the most scientific research but it's the data I have with the data logger. The weather doesn't seem to change the projected range too much but I can definitely say the range is greatly reduced in the winter months.

Tesla recommends that you do not charge the car regularly to 100%, unless you absolutely need the range on a trip or something. If you charge 100%, you want to drive the car to 90% or lower as soon as possible. The data I am sharing it based on occasionally charging to 100% and driving immediately.

How much did it cost?

I still rock the factory set of windshield wipers, but I recently ordered a set of FCP Euro for $29.42 USD (including shipping and tax) which I will install in a few weeks or a month. They are highly recommended by many of the /r /Teslamotors subreddit because they can be replaced for the lifetime of the car by shipping them, and FCP Euro supplies you with a new replacement. Hopefully, they will be recycled?

I didn't pay for supercharging at the time. It was really nice not to have these costs on trips to South Dakota and Canada. Okay, so I spent a total of $10 on charging for one night on the Canada trip. At home, we paid a maximum of $60 USD to recharge the car from time to time or to avoid stopping somewhere to recharge somewhere, and that with a fairly inefficient 120 V socket. If I had to pay for supercharging I would estimate it would have cost approximately $2079.28, based on $0.28 per kWh (US average). Consider buying a Tesla Model S, 3, X, or Y? If you could kindly use my referral link when ordering. I will use my extra miles to photograph our beautiful country. See below:

⚡⚡⚡ Use my referral link to receive 1,000 free Supercharger miles with the purchase and delivery of a new Tesla car, or earn a $100 award after system activation by purchasing or subscribing to solar panels: https://graydonschwartz.com/go/tesla

In terms of maintenance, I saw a significant savings. As for charging against refueling my previous Toyota Prius, it would probably be the same or even slightly better if I didn't have the free charging from Tesla. We're looking at about $0.1230- $0.1430 per kW (winter versus summer), i.e. $7.995 in winter for a 65kW charge or $9.295 in summer. Suppose you fill your Prius with 11 gallons of gasoline, you're looking at $19.69 @ 1.79 (regular). In addition, I would have had to change the oil 3.7 times on both of the two previous cars, which would have costed approximately $300 for Mobil 1 Full Synthetic (total).

I can't forget that I had to refill the windshield wiper fluid, which cost $5 from Costco.

All in all, I am very pleased with this electric car and the future Full Self Driving features that are currently being tested. I am looking forward to shooting some fun videos of FSD on more obscure roads as well as some ordinary roads in Madison, Wisconsin. Thank you for reading to this point and can't forget to thank our sponsor Arcadia below.

Photo by Martin Katler on Unsplash