I recently got to see the new GoPro Hero 8 and couldn't help but have the question, “How does it compare to the Osmo Action?”. I have owned the DJI Osmo Action since May 2019. It's on sale right now for $100 off for the HyperSmooth 2.0 action camera OR $310-350 if you want their bundle kit. 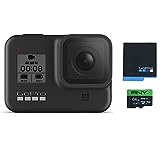 Whereas, the DJI Osmo Action has an advertised 145° field of view (FOV).

I would really love to have the ability to to set my digital lens between 39mm and 16mm. This is a real game changer!

GoPro: I wasn't able to find an official document mentioning the total amount of battery life however it appears it's about 50 minutes on a single charge.