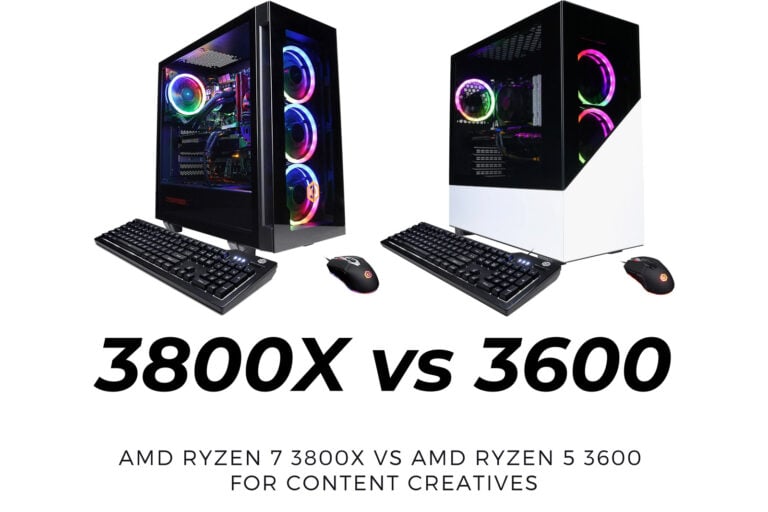 The AMD 3800X has a 300Mhz base clock lead over the AMD 3600 however, this might not make that big difference with Adobe Creative Cloud or LuminarAI photo editing software.

Both builds have the same amount of memory but have different hard drive configurations. Hopefully, the 500GB SSD is installed as the boot drive.

I would have liked to compare the 3600 to the 3900X; however, I could not find any specials on that magnificent processor. It seems to be geared more towards enthusiasts that prefer to build their own PCs. I am aware the 3800x is the ugly duckling that most reviewers don't recommend, but it can make sense if it's the better deal over the present 3700x deals, essentially the same processor, as far as performance is concerned.

First off, let's take a look at the major differences between the specs of these machines.

I wanted to be sure to include this information because it will impact the performance of the tests performed depending on off the shelf availability.

The Gamer Master (AMD 3600) arrived from Best Buy with some small blemishes and nicks on the case but nothing large per se, in a self-explanatory retail PC box. Possibly from shipping or during the assembly process. The Gamer Supreme PC arrived in a non-descript box from Amazon, and its case is looking flawless. Discreet boxing is good at all times of the year.

Each boot up to a plain black background, which I don't mind at all. I only saw CYBERPOWERPC referenced in the ‘basic information about your computer' section in Windows. Both came running Windows 10 Home Version 2004 (OS build: 19041.208) and Windows Feature Experience Pack 120.2202.130.0. I checked for updates and only went back to the version 20H2 October update. Radeon Software Version 20.9.2 which was released on 9/22/2020. Nice! Not bad at all.

Neither computers have SD or MicroSD card readers. This will need to be added as a USB add-on for a few bucks if you want to import your camera or drone footage.

I took a look at the applications pre-installed on both of the systems and couldn't find anything non-Microsoft in the list besides the AMD Chipset Software and AMD Software package for the GPU. I chose to uninstall Microsoft 365, but that comes with Windows 10.

I saw memory usage of 4.4/15.9 GB with nothing running, Google Chrome installed, and Microsoft 365 uninstalled.

Impressed to see the 3800x with a 369 point lead compared to the 1950x, which is the last CPU I used in my previous desktop build. Only a few years ago, and this consumer processor is crushing it! 😮

I opened up Open Hardware Monitor to see the highest temperature at idle at 35.0°C for the 3600 on-air, while I observed the water-cooled 3800x bounce between 34°C to 46°C while not under load.

Happy to see they installed two sticks of DDR4 memory for proper dual-channel speeds on each system. Watching Linus Tech Tips latest video on pre-built machines showed many major PC builders forgo this, run their systems in single-channel, which is worse for performance and a waste of memory.

Next, I used PassMark AppTimer to calculate the time to startup these programs when I tested my laptop but for these tests, I decided to give PugetBench for Adobe Creative Cloud a try because I felt it would paint a clearer picture of how well these systems perform.

I initially ran this test on Lightroom Classic 9.3 (AMD 3600) before realized there was an update out and saw the following differences between 9.3 and 10.0.
Overall Score: +18
Active Score: +4.4
Passive Score: Same

The AMD 3800X does incredibly well with the Adobe Lightroom Classic workload! 🙂

I used PassMark AppTimer to calculate the time to startup these programs and RAW files from the Mavic 2 Pro for the HDR tests.

Check the price of Aurora HDR.

Settings used:
Auto Aligned: ON
Ghost Reduction: OFF
Chromatic: OFF

I wasn't planning on downloading any games at first but figured it would be good to download the massive 84.73 GB digital download of Gears 5 for the benchmark. I saw around 225-235 Mb/s over ethernet on a 300 Mb/s cable connection, but that could be because of all the people at home these days.

I turned on Delivery Optimization in Windows and saw a minor increase in download speeds. This will come in handy when downloading software on the next PC I will be testing.

In Windows search. Type “Allow downloads from other PCs” and you will be brought to the Windows Control Panel section for Delivery Optimization. From here you can select if you want your downloads from other PCs on your network or PCs on your local network plus PCs on the Internet. If you find this slows down your internet you can always flip this back after you are finished downloading.

Right now you can get 3 months of Ultimate for $1.

We are really not seeing much of a difference between the RX 5700 and the 5600 XT. I was hoping for a bigger difference but it just is not there for this title at 4K with a locked 60FPS. You can see in the screenshots above which settings were used on each game benchmark. The 5600 XT bottomed out at 55.5FPS, while the 5700 XT managed 58.3FPS.

Then again, there is a significant improvement between these two CPUs which you can see in the nice increase in CPU framerates but at the end of the day, its just bragging rights as there was very little noticeable difference visually. 🙂

I didn't notice any obnoxious lights on the Gamer Supreme (AMD 3800X) PC while it was asleep, but I did find the Gamer Master (AMD 3600) did have an annoying blue light that blinks near the power button while it is in hibernation. I kept placing the remote control for my monitor on top of this light so it wouldn't illuminate the whole room.

If you want better gaming performance, it looks like the AMD Ryzen 5 3600 is plenty of CPU and a better GPU would be best for optimal graphics. You will save money on the CPU and better FPS. 🙂

The Gamer Supreme (AMD 3800X) is a bit stronger PC if you plan on using it for most creative works instead of gaming. The AMD 3700 or AMD 3700X could also be exchanged at this price range for similar results.

If you wanted better performance for gaming it looks like the AMD Ryzen 5 3600 is plenty for CPU and a better GPU would be best for optimal graphics. 🙂

I wanted to run a benchmark on Luminar AI, Aurora HDR, and Luminar 4; however, I couldn't find any solid options. Instead, I used timing speed for launching the programs and a manually timed HDR combination.

I hope this article helps you in your creative decision making on what system best serves your needs!